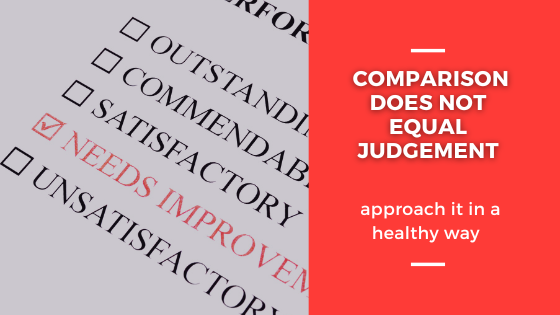 Comparison is a biological inevitability. Here’s how to approach it in a healthy way.

Comparison is a word that can have negative connotations for lots of people based on past trauma or even current inner narratives. But that doesn’t have to be the case… especially since there is no way to reprogram your brain into avoiding comparison altogether. But it doesn’t have to be a problematic practice if you do it right! It’s all about being cognizant as you compare yourself to others in the business world, and how you shift the narrative to make sure your inner narrative doesn’t turn toxic.

It can happen in an instant as an entrepreneur. One moment you’re feeling on top of the world and you’re thrilled with your business and the next, you’re spiraling into a sea of self-doubt. A lot of things can trigger that negative narrative but one of the major factors in the thought process is comparison. As you’re going about your business, it’s easy to get derailed by someone else who appears to be doing better, thinking smarter, or going further than you are, even if you have very little evidence that they’re outperforming you. The data your assessment is founded on is purely a comparison between how you think you are doing and how you perceive their performance.

Recently, an entrepreneur friend of mine had a moment where she experienced this. She was looking through social media and she came upon a business that sold a similar product to her own. She saw the gorgeous photo spread and intelligent marketing tactics and immediately, her inner voice started talking about how much better the other approach was and how she had an uphill battle in front of her to compete with that. At this point, she was at an impasse. She had two choices. She could either silently despise her competitor for their success or she could change her approach. She chose to do the latter. Instead of being frustrated or angry, she sent the business owner a very complimentary message, commenting on how beautiful the photoshoot had turned out, how great the product spread looked, and how impressed she was with their work. Instead of spewing additional negativity into the world, she chose to shift her energy and spread some positivity to another small business owner.

This mindset shift was a major turning point for her. Instead of feeling bad about her own entrepreneurial efforts, she was able to feel good about how her positive words had made the business owner feel and move on from the destructive thought spiral. This is an excellent example of how we can all change our mindset to approach these comparisons with thoughtfulness and grace for ourselves, rather than allowing them to be an opportunity for negative thoughts to creep in.

What Is Comparison Syndrome?

Comparison syndrome can be embodied with the following statements:

1. You frequently feel like a failure when viewing the success of others.

2. You feel dispirited and paralyzed in moving forward with your own work because it will never measure up to what others have done.

3. You discount your ideas because you fear that they aren’t as good as those of your colleagues or industry peers.

Anyone can fall victim to comparison syndrome, but it’s particularly easy for entrepreneurs. Starting a business is a messy, unpredictable, sometimes frustrating roller coaster. But the answer is not eliminating the practice of comparison from our repertoire.

Why Comparison Is A Survival Technique?

Every time you enter a situation, whether it’s walking into a room or meeting a new person, you’re comparing everything you see with what you’ve seen before. Your brain is hardwired to look for familiar things and determine if you are in a safe environment based on that comparison. Comparison is the act of a brain that is trying to keep us safe. It’s the inner narrative that follows telling us we have to be more like that person to survive where things can get sticky.

For a lot of us, a comparison was a trauma experience at some point in our past. We’ve all been compared to other people and their inner narrative has been imposed on us based on the logic that “if you’re going to survive, you need to be more like that person”. However, as a child, you don’t understand that you are following a mindset that is about survival. Instead, you might feel as though you are less than. The trick is changing the feeling surrounding comparison into a positive one.

As it stands now, your comparison narrative likely goes something like this:

3. Based on your instant perception, you assume that they are doing much better than you are.

It’s an easy assumption to make due to the fact that you have in-depth knowledge of the complexities of your own life and a 2-second snapshot of the person/thing you’re comparing yourself to.

4. You see deficits in yourself that lead you to feel poorly about your own performance.

5. You allow this comparison headspace and carry it with you as a contributing factor to your own self-worth.

Here’s how we change that narrative!

3. You recognize that your brain is processing the world around you and that your personal success, in business or otherwise, is in no way diminished by the success of that person. You move on with compassion.

Comparison is natural, normal, and unavoidable! It’s the part of your brain that is trying to keep you safe as you move about the world. The judgment that comes after the comparison is where the real problem lies and the good news is that judgment is completely optional! When you disrupt the inner chatter based on trauma experiences that leads to the negative thought spiral, you can experience comparison without self-denigration, which is both healthy and effective. Then you can thank your brain and body for keeping you alive and move on!

On the flip side, comparison can also lead to procrastination. I explore more of this topic in 5 Surprising Reasons Entrepreneurs Procrastinate.  Click on the link to read more!

So what do you think? Do you approach comparison this way? Or would a disruption be helpful?

Let me know in the comments and get this conversation started! Are you curious about trauma’s impact on your own business? You can download my Trauma & Entrepreneurship Assessment here.